I’m quite late so by the time I arrived, didn’t really get to chat with a lot of people (but the few I get to chat are really fun-loving girls~) but managed to find a lot of old-school toy on the table~

Soon the lead actress comes on board.
What is a Kampung burger?

It’s actually made with some farm fresh lettuce, a tangy slice of crispy chicken, a piece of cheese, topped by a slice of pineapple, all packed between two old-fashioned toasted muffins~

How does it taste like? Hmm…
Have to admit when I first saw the BIG piece of pineapple on top I am very much tempted to remove it before I eat the burger (I’m usually don’t eat pineapple unless they are in the pineapple tart form), but the unique selling point is the pineapple! So I just have to give it a try anyway, surprisingly I pretty like the burger!
It’s juicy and the chicken is not too spicy. But due to the thickness… I will probably “dissect” it to eat layber by layer the next time I try it again 😛 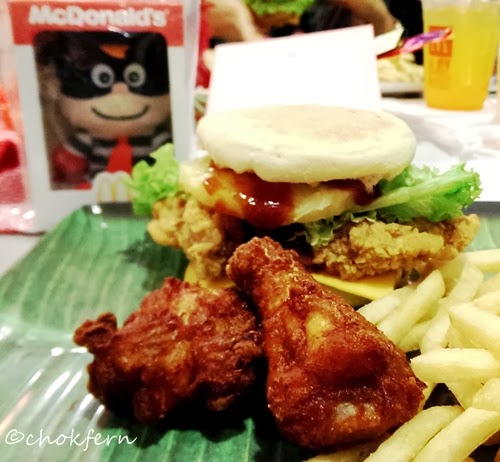 Whatsup with these two little chicken drumlets? they are the Kampung BBQ Drumlets! These tender and moist chicken drumlets are marinated with traditional spices – paprika, garlic and onions, and are available in 2-piece and 10-piece packs. I think I can finished the 10-piece pack with no difficulties~

Look what we get to enjoy from the party other than good food?

Are you aware that the McDonaldLand Characters Plushie is available at $2.90 each with any purchase from 28th November 2013 onward?

As usual, the event must end with a group photo.

OMG! Look how much I expand after I came back from New Zealand… It’s just less than a month and I upsized by two~~ T__T