Thanks to Incinemas.sg, I am one of the 10 person who have the honour to win a pair of tickets to attend the premiere screening of the romance Korean movie – ‘The Werewolf Boy’. 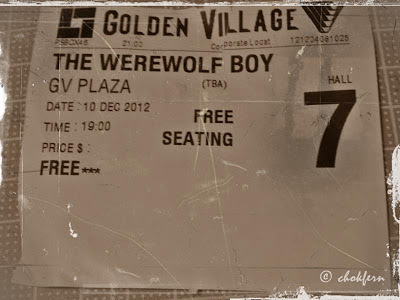 The story started with an elderly lady – Kim Suni, who received an unexpected phone call, and decided to return to Korean to visits the cottage she used to live in when she was a teenager. Back to the place, it bring her memories back to 47 years ago.

Suni was forced to moved to a small rural village due to her health problem and she soon discovered a ‘wolf boy’ living near her house. Her family and the boy was forced to stay together but eventually they build up a relationship, when her mother treated the wolf boy like her son. Ji-tae, a suitor of Suni got jealous of Suni and the wolf boy, he begins to cause trouble and try to endangered the wolf boy. In order to protect the wolf boy, Suni leaves the place so that he can hide with no worries for her on his mind. She then left him a note with promise: “Wait for me. I’ll come back.”

The front portion of the story is unexpectedly funny, and you can hear laughter around the theater… as it progress to the last portion, people start to dig up their tissues and start sniffing.

To be frank, the story line is not tight enough, but it is interesting and the ending is a bit out of my expectation (in as positive manner). Nevertheless, I think it is quite a nice show to watch. 😀 And once again, need to thanks Incinemas.sg for giving me the privilege to watch the show before the public screening date!

Frozen on a Halloween Night