So when we show Kpo Kia the video of DinoQuest, she expressed her interest to watch the exhibition at the Singapore Science Centre. Since we bought the tickets early, we are entitled 20% discount. ^_^

As the tickets are open-date, we decided to skip the June holiday crowd and went in July instead. Great decision as we went to Science Centre in June and the queue is pretty long with at least an hour wait expected! =.=”

Before we set went in, we are issued an RFID i-DinoTag. We will get to discover our own fossil as we move through the different zones within the quest. There are a total of seven zones, visitors get to experience activities like drilling through rocks to find bona fide fossils, and the multi-sensory expedition is even captivating to us adults.

In the Explorer’s Hut, we get to meet our guides, Professor V and her assistant Rex, via a Diorama Projection show that gives us a glimpse into how Australia’s very first dinosaur fossil was discovered. We then ‘collect our fossil’ using our DinoTag!

We have transported eons back to the early Cretaceous period upon stepping into the exhibition area! The entire space recreates what Australia’s environment looks like when the polar dinosaurs roamed the land, down to the glistening Southern Lights criss-crossing the sky. We get to see the Koolasuchus, Ankylosaur and Pterosaur as if they were alive, alongside Australia’s Dinosaur Cove native Leaellynasaura and Timimus – both of which were named after palaeontologist and DinoQuest curator Patricia Vickers-Rich’s children. Visitors can experience the disaster that extinguished the dinosaurs in Zone 3’s immersive 4D Extinction Theatre. With effects like smoke, lightning, and volcanic eruptions, this show brings the theory of the dinosaur extinction event to life. Combining hologram tech with the replica of an actual dig site, Zone 4’s Dig Site let us go through the process of fossilisation from start to finish.

We get to take on the role of a Dinosaur Detective and discover how fossils are formed and learn to distinguish the different parts of a dinosaur’s anatomy.

We get to enter a paleontologist’s high-tech laboratory, get up close to the actual tools used in excavation projects, and witness the real preparation process behind fossil extractions.

We also got a chance to extract actual fossils at the Bone Station where the rocks have been shipped in from the Dinosaur Cove excavation site in Australia. There are several interactive exhibits scattered around this zone, for visitors to get hands-on with the science behind dinosaurs. We saw the dinosaur skeletons that represent the species found at Dinosaur Cove The concept of science being ever-changing is illustrated through a sliding digital screen, which shows how the world’s perception of the Iguanodon has warped and transformed from when it was first discovered, as new information and fossils were uncovered over time.

There’s also an updated life-sized reconstruction of the tyrannosauroid Timimus.

Find the concept of the zone similar to the one in Creative station in Kiddomo Innovation Centre.

We can scan in our DinoTag to print our fossil on a paper template to color, customised the way we like it, before scanning it into the machine and bringing it to life!

Upon scanning in our artwork, an egg will show on the projection and hatch to release our dinosaur into the Dinosaur Park, where it can roam around freely.

Overall, I think we took less than 1.5hrs beside my intensive photo-taking practice. The place is a bit smaller than I imagine, but I quite like the surprise here and there between the different zones.

Kpo Kia enjoyed the day, and keep showing off to her grandparents the next day that she went to the dinosaurs. LOL!

Happy Birthday to Myself~! 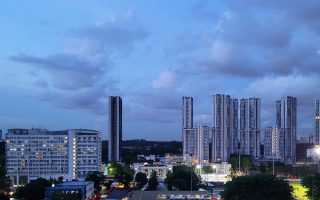