This is a very backdated post, I guess for the next few posts I will still post events that happened in 2016, just for record purpose 😛

After few months stucked between the few house – our house, his parent’s house and my parent’s house, we decided to take a break and have a staycation in case an overseas trip is too challenging for us. We settled for D’kranji Farm Resort which we had previously wanted to stayed before we got Kpo Kia but postpone for some reason.

Packing for 3 days 2 night staycation with a then 10 months baby turns complicated for this pair of first time parents. We tried to keep things simple by just feeding baby cereal but we still ended up bring the following things along:

We booked the Standard Villa (at $150/night) with the most basic facilities as most of the time we will not stay in the room to enjoy them. Interesting enough, they have a Superior Villa which is available with exactly the same facilities, but around $20 more expensive just because it’s newly renovated with a more modern deign =.=” Upon reaching there, we will informed that there is no WIFI available – which is a bit meh since Kpo Kia papa is with the new telco plan and he only have 2GB of data!

Kpo Kia papa get to show off his great driving skill while parking the lot into the private lot – the space is a bit small and it’s a bit challenging to carry the fatty Kpo Kia out of the car, but in a space constraint Singapore, we can’t asked for too much, right? 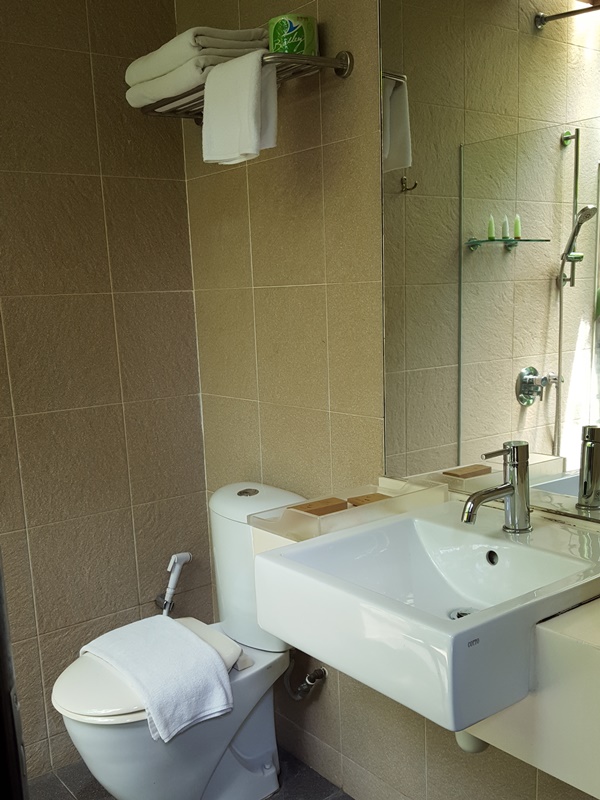 Unfortunately I was sicked that day, so Kpo Kia papa brought us to Woodland to visit doctor before we go to Causeway point for a late lunch. We didn’t shop much as I wasn’t in good condition, so we went back to the resort for a rest shortly.

Time flies and it’s dinner time, we went to the D’Beer Seafood Restaurant in the resort, the food is decent and the price is affordable (I am not referring to cheap though). The high chair of the restaurant is the old school design but I am unable to show you any photos as I am not my usual photo-snapping’ self because of my flu. Kpo Kia loves to watch the fish swimming around the tank inside the restaurant and glad it keep her well occupied during our dinner.

After dinner, we went around the resort to see people prawning for a while before we retreat back to our villa to rest. There’s not much activities there after 8 other than dinner, prawning, and drinking, we really feel like we are staying in a rural area – there’s not much lights outside the villa so we didn’t think of going out.

Day 2
Breakfast is provided and we ‘rush over’ after showering Kpo Kia, but we sort of kana “lectured” by the uncle there because we reached at 10am – which is supposingly when the breakfast supposed to be ended (we thought it’s 10.30am). It’s actually nothing much, just some sandwich with sausage, not for fussy eater. 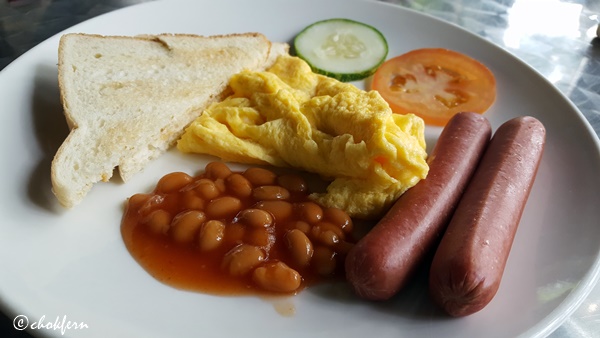 We hang around the breakfast area since they have a “weekend market” where stalls are set up to sell handicrafts or organic food. We get to chat with one of the uncle who sell the organic vegetables, he shared a bit of his life with us and it is quite interesting that a high flyer like him decided to turn into farming. The gentleman admitted that he didn’t earn much selling ‘almost organic food’ (it is impossible to achieve organic standard with Singapore environment) 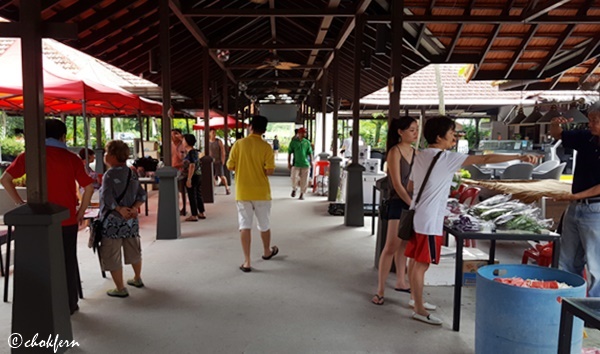 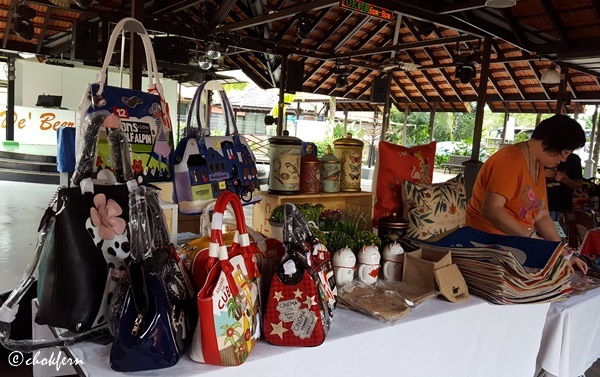 As I watched a youtube video that some of the farms in Singapore will not get to renew their lease after mid of 2017, you can read more about it here if you are interested, we decided to take this chance to do some farm hopping.

Hay Dairies
Our first farm hopping destination is Hay Dairies
The goat farm is started by Mr Hay Tak Tang who initially started off by rearing ducks, chickens and pig and later switch to pig farming in the 70s. In the early 80s, pig farming was phased out in Singapore and by 1988, Hay Dairies become the only goat farm in Singapore producing fresh and pure goat milk locally. 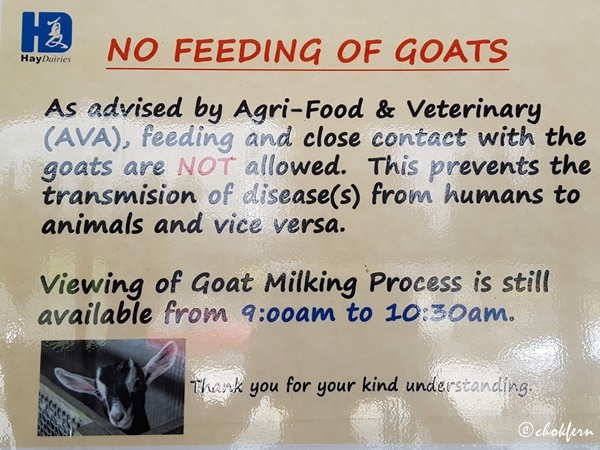 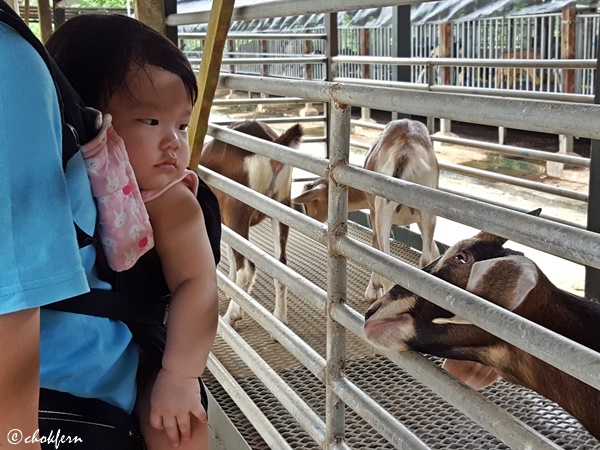 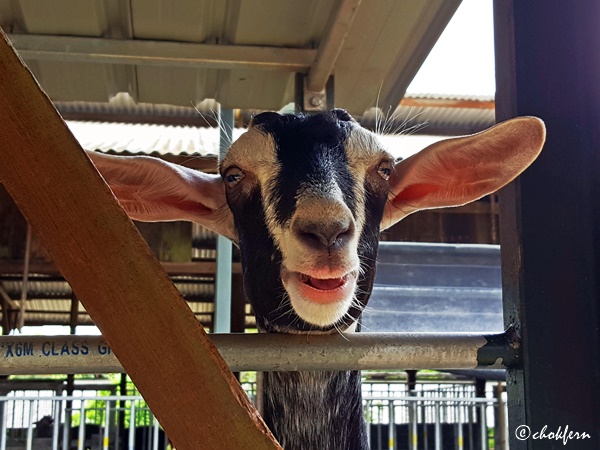 You can opt for a guided tour (in minimal group of 20 pax) to learn more about the operations of Hay Dairies (although we just roam around for free). Tours take place at 9am, 9.30am and 10am daily except for Tuesday which it’s closed (unless it is a public holiday) and cost $3.21 a person. Remember to make the booking at least one weeks in advanced.

Jurong frog farm
I remembered watching a short video of the daughter of the frog farm owner sharing on the uncertainty ahead after most of the farms need to relocate, so we decided to drop by before it is closed for good.

In 1997 Mr Wan began to research and develop the popular Chinese beauty enhancing ingredient known as Snow Jelly (Hashima雪蛤) and launched the bottled Premium Hashima with American Ginseng in 2012.

Kpo Kia papa had wanted to try frog meat & crocodile meat but I was not game enough (especially after looking at the ‘raw’ meat in freezer), so we settle for the Royal/Traditional Hashima Bowl. There’s nothing specifically different to me for the 2 type of Hashima Bowl but it’s really shiok to drink something so cooling on a hot weather. 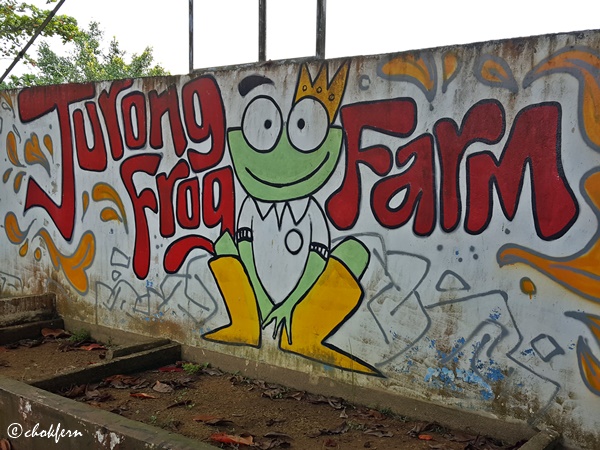 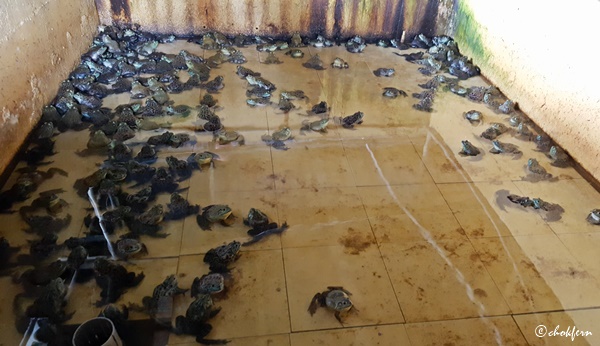 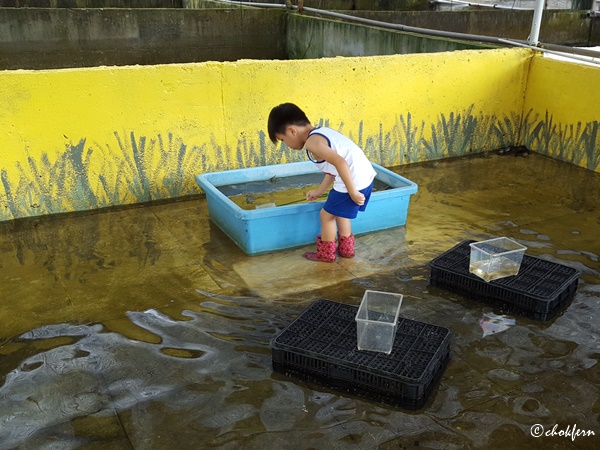 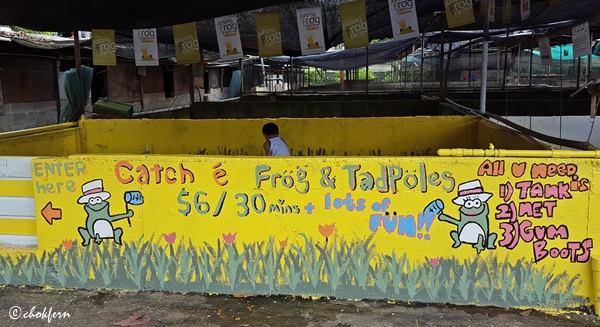 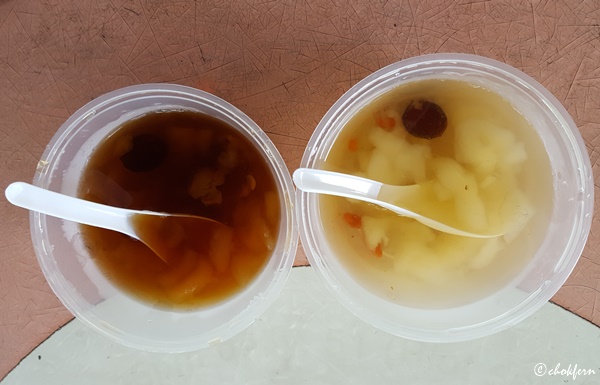 Bollywood + Poison Ivy
I keep bugging Mr Ong to go to Bollywood as it is a famous landmark in Kranji and I would like to tour around it. We decided to have early dinner at the famous Poison Ivy before we walk around the place. 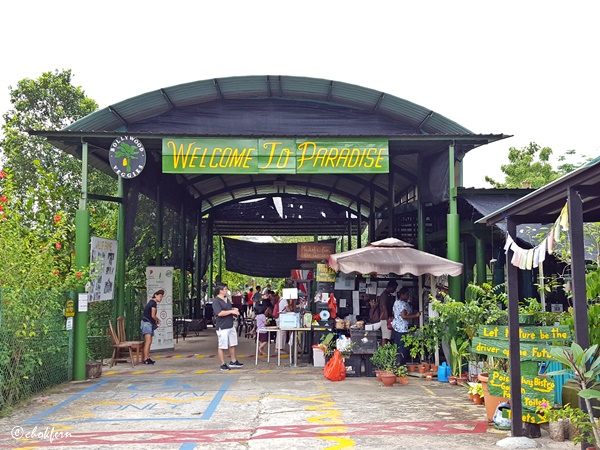 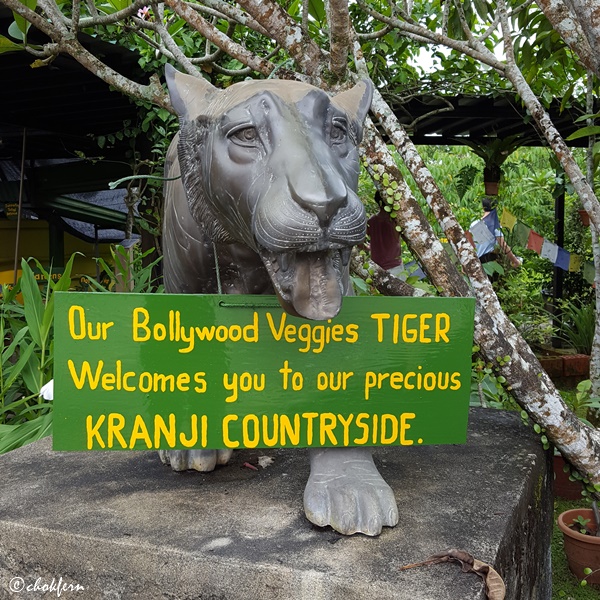 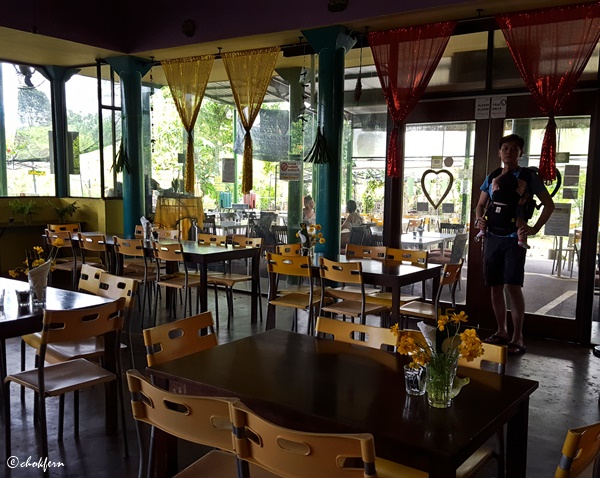 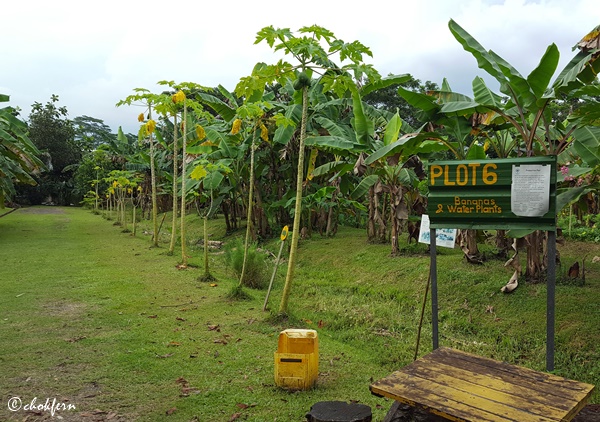 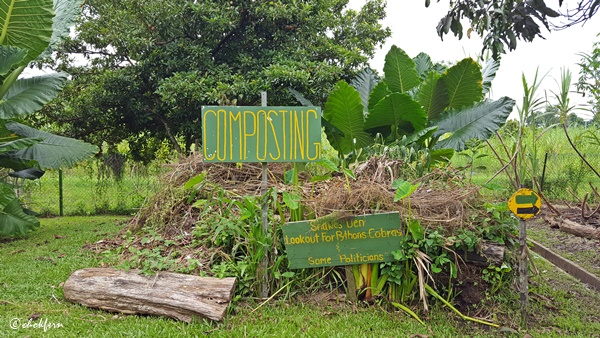 Bollywood Veggies story was started in 2000 after Ivy Singh and her husband Lim Ho Seng shelved plans to move to Perth. With the death of one of Ivy’s best friend’s husband, the couple pondered the direction their lives would take in their retirement years. They chanced upon a newspaper story about farming in Singapore, and decided to explore the Kranji countryside. Ivy and Ho Seng established the farm and successfully tendered for a lease on 10 acres of land – where Bollywood Veggies was born. The name Bollywood Veggies was chosen because of Ivy’s half-Indian heritage, and also to reflect the enthusiasm and boisterous personality of the farm.

Kpo kia had a hot and tiring day but freshened up after a nice shower.

Day 3
It’s a short day for us, once we wake up, we quickly pack before we rush to have our breakfast. After that we went to the Bird Nest museum for a “short, commercial tour” before we left the Resort.