Since I was very young, I longed for a family trip – with my parents and siblings to America (back then I thought that is a nice place to go for whatever reason, not knowing the distance, time and money required to go there).

Beginning of 2017, Bro proposed to have a family trip to nearby country and we settled for Bangkok. He managed to convince dad to come with us and that is one of the happiest news I know for this year.

The preparation – for a trip with a 18 months old toddler
In the past, packing for a trip can easily took me 1-2 weeks depending on where I am going. I enjoy the process of packing a lot of stuff into my luggage and slowly filter them as day pass by, so I can have the holiday mood kick started earlier. Interesting enough, packing for a trip with a 18 months old toddler actually means I have so much more to prepare, with so little time to pack (Kpo Kia is a black hole who suck all my time… willingly).

These are the things we packed for her for a 4 days 3 nights trip:
Checked-in luggage

Initially we wanted to pack along a stroller, but due to the road condition + possibility of unable to squeeze into their BTS + unable to find a decent 2nd hand umbrella stroller, we gave up the idea.

Our world class Changi Airport
Once we entered the departure hall, Kpo Kia papa and I started to look for a stroller to contain kpo kia so she won’t be able to roam around too freely. :X
We saw a staff walking towards us and asked if she knows where we can find a stroller. She gave us a bright smile and replied us that it was her intention to offer us a stroller. 🙂

The flight from Singapore to BKK
We decided to take SQ because of the following reasons:

Just before the flight took off, a sweet air stewardess approached us to set up the safety belt since Kpo Kia did not purchase a separate seats. She explained to us that bassinet will be set up only after the flight is stabilised in air, took a look at Kpo Kia, and added that ‘as she is quite…, maybe it’s not advisable to install the bassinet’. Guess she saw my hurt face, she added ‘she looks really alert now, bassinet is meant for babies to sleep, so later when she is sleepy then we can install the bassinet, if that is what you want’. Although I replied ‘Yes, please.’, it never happened. By the time Kpo Kia is sleepy, it’s 30 mins before the landing timing and sweet air stewardess advised us against it again… so Kpo Kia finally slept on my chest… till the flight landed in Bangkok.

*Flashback*
As sis was the one who bought the ticket, I wasn’t able to select the meal for Kpo Kia. For whatever reason, sis popped me a question – should she place order for a child meal or infant meal? I quickly do a google search and decided that Child Meal for Infant (CHMLI) might be the best choice for Kpo Kia since she don’t like the baby puree jar provided in Baby Meal (BBML) (we fed her previously and she didn’t finished it!) and someone commented that Post-Weaning Meal (PWMLM) does not taste as nice. So I replied Sis ‘Infant meal’! 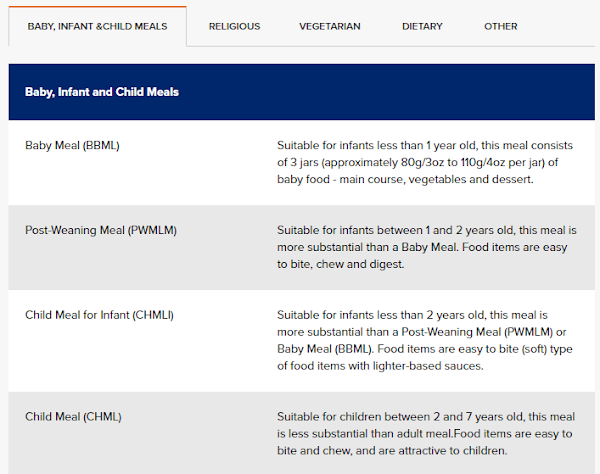 I was shocked when the air stewardess told me that they will be passing me 3x baby food jar and I guess my facial expression spelled it all so they show me the meal I order in the ‘code’ – of course I can’t remember what each code =.=”. Since it is just a short 3 hrs flight + the air stewardesses are really friendly to Kpo Kia and polite to me, and volunteered to pack the food for me since she saw we fed Kpo Kia milk, I just let the matter rest. 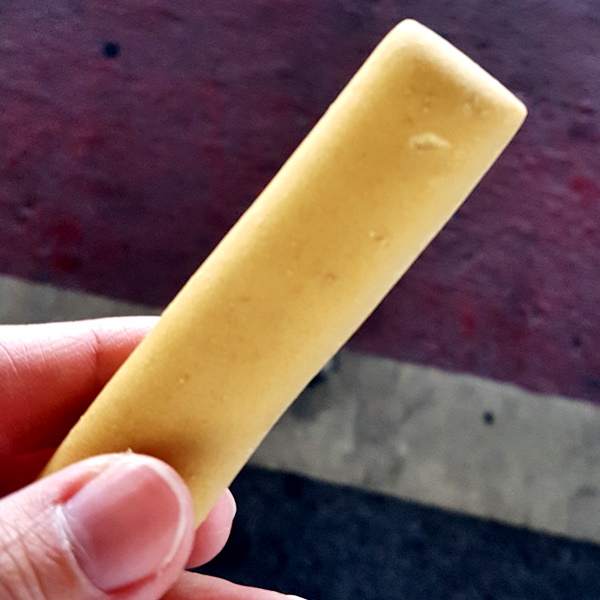 In additional to the 3x food jar, I found a pack of 2 pc biscuit in the bag, although I feel the biscuit a bit hard, I pass 1 piece for Kpo Kia to ‘磨牙齿’ since I was told previously that harder biscuit helps Kpo Kia to learn how to bite. We soon realised Kpo Kia is not interested in the biscuit at all, and she passed it back to Kpo Kia papa. Guess what? We saw blood stained on the biscuit. We quickly remove it from Kpo Kia.
(*Fast foward* while waiting for our transport to fetch us @ Bangkok Airport, Kpo Kia papa and her uncle tried to break the biscuit with barehand but is unable to do so @_@)

Towards the end of journey, dad started to give a killer stare to one of the stewardesses. Understand from him that she “sound harsh” when she talked to mum – mum tried to keep the leftover cheese cake for later consumption and was ‘discovered’ by her, she then told her that it is a property of Singapore Airline and mum have no rights to bring it down the flight (assuming such since this is what most aunties will do).

To calmed dad, I then tried to listen to her side of story. Her version is similar, just that she insisted her tone is not harsh at all. I tried to help her rationale that the reason why SQ do not want people to bring food down the flight is mainly because, similar like attending wedding dinner, some hotel do not allow guest to bring food back home as they worried that these guests might mishandled the food and blame it on the hotel. I was surprised that as well-trained and well-spoken as these cabin crews, they can’t even pacified 2 old folks. 🙁 I have to say she sound polite to me throughout our conversatio but at the same time she is really film and refused to apologise for her tone/speech. 🙁

So yah, this is not my first trip on Singapore Airline, it used to be pleasant even when I feel some cabin crew do not treat ‘common folk’ as friendly but it’s the first time I quite so disappointed by their services.

Family trip on Royal Caribbean Mariner of the Seas (Part 2)