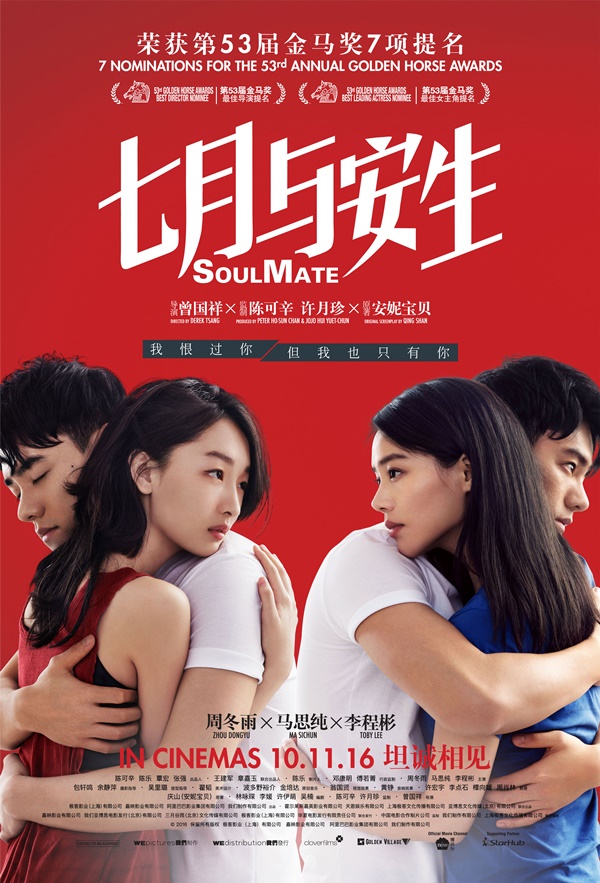 Movie synopsis
LI ANSHENG is an ordinary 30 year-old working woman. Her quiet life in Shanghai is suddenly disrupted by the publication of a novel, entitled “Qiyue and Ansheng”, a chronicle of her friendship with QIYUE during her youth. Coupled with an accidental encounter with SU JIA-MING, her long repressed memories are unleashed with the force of a tsunami…

The first note in the prelude to youth sounded at the age of thirteen. Qiyue and Ansheng seemed destined to become friends from the moment they entered high school. The two girls were complete opposites; one was as calm like water, the other was passionate like fire. They were inseparable and believed that their bond would last for the rest of their lives. But the cruelty of youth reared its ugly head when they both fell in love with the same man – the year they both turned eighteen and saw Sui Jia-ming for the first time.

Ansheng tried to suppress her feelings for Jia-ming. But it took just a single moment for their youthful passion to ignite; and suddenly they we hopelessly entangled in a complicated love-triangle. Ansheng tried to distance herself from Jia-ming by pretending to be in a relationship with another man. She even planned to elope. But on the eve of her departure, Qiyue discovered her relationship with Jia-ming. Qiyue decided to keep her knowledge of their affair secret. The two best friends quietly went their separate ways but both knew that things would never be the same.

It was the beginning of Ansheng’s vagabond existence. Qiyue remained at home like “a good girl” to safeguard her love with Jia-ming and await Ansheng’s return. The lives of the two women followed two different trajectories; their paths never crossed. Their only means of communication was through the unbroken stream of postcards that they sent each other.

Through their strange correspondence, the two women prolonged their friendship; filled with both longings and misgivings. They didn’t want to lose each other and even tried to reconcile. But Jia-ming remained the one obstacle that they could not overcome. It would all inevitably lead to destruction…

More than ten years had passed since Jia-ming last encountered Anseng. To his surprise, Anseng and Qiyue both lead parallel lives. Even more shocking is the discovery of along buried secret shared by the women – a secret that serves as an emblem of their youth and the proof of their friendship.

Language: In Mandarin with English and Chinese Subtitles

Review
Had initially thought that this is a story about same sex relationship after watching the trailer, and was curious on how it can have 7 nominations for the upcoming Golden Horse Award. The movie is adapted from the same name online novel written by Annie Baby.

When it come to the ending, I nearly teared over the twist in the ending.

Ansheng and Qiyue are best of friends and they believe nothing can change their friendship until the ultimate test – Su Jia-ming comes into the picture. Not sure if it’s due to the time limit of 110mins, there wasn’t much emphasis on Jia-min’s stand and how he feel between the 2 girls.

I love the way the director present the whole show, on how the girls lead a totally different life after they finally speak their mind. No matter how the friendship is broken due to the mistrust caused by Jia-ming, they will still have a place for each other in their heart. They tried to protect it, but life is never a bed of roses.

There’s still some questions in my mind till now, like whether the loving husband-to-be of Ansheng really exist or not, why Ansheng hates her mum so much, all these will goes unanswered, especially when it’s slightly different from the original story, so I’m really curious on why the director decided to present it in this way,

Love the theme Song! You may listen to it on the MV: