Since the event is held on 10 & 11 Aug 2019, and it is the long weekend which we initially plan to rot at home, I signed up in hope to get some entertainment for Kpo Kia, and hopefully, I can get a goodie bag to fulfill my cheap trill.

After our standard weekend routine, we managed to reach the event area at 3pm =.=” we debated a while on where to park as it will restrict on the duration we will stay in the event… and Kpo Kia papa finally decided that we should stay put at the Red Dot Design Musume Carpark which is charged $0.80 per half hour on Saturday (1 PM to 7 AM), despite my preference of parking at MBFC as their parking cost $3.21 for first 4 hours, which means Kpo Kia can play for a longer period.

We were too late for the goodie bag as there is a limited number to be given out daily, but we get to enjoy a traditional ice cream from the uncle who is supposedly famous for selling them outside ICA?

We roamed around and saw that half of the tents are actually selling food, which we are not interested since we just took our late lunch. ZZZ

Some of the activities are chargeable, but since they are more suitable for bigger kids, we gave them a pass as well. Was taken aback when it seems that event under the same tent, some of them don’t really know what are the activities about zzz. Kpo Kia loves the bouncing inflatables but got a good fright from one with a steep slide. 😛 Kpo Kia papa saw some kids putting on the Spartan Kids headband, and decided to be adventurous and let Kpo Kia try it out. She is fearful for some of the obstacles, but she overcomes the challenges (with some help from Kpo Kia papa and the event staffs of course). Good Job, Kpo Kia! Papa and mama are so proud of you!

Somehow she scratched her forehead and it bleeds a bit, but she wasn’t aware till we saw it. When we approach the event staffs (during their briefing), one of them immediately brings us to the first aid area without hesitation, and make sure the first aider attend to us before he went back to the briefing. Thank you, Mr AIA!

We managed to finish playing all the activities Kpo Kia can play within 2 hours, and rush home for a short rest before we rush over to Punggol to view the fireworks in later part of the day 🙂 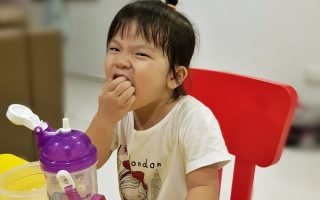