Today is the 4th month after Leticia is born, decided to share my delivery experience on this public blog with other first time mum who might be interested. I have to say that everyone have different experience depending on their expectation and pain threshold.

My EDD (estimated date of delivery) is supposed to be 17th October, and I was told by others that for the first baby, mummy usually will delivered earlier than the EDD. So this gave me a very good excuses to take my maternity leave 2 weeks earlier than my EDD (I was actually very tired and lazy to squeeze change 1 LRT + 3 lines of MRT daily and have to stand throughout the journey at times).

But guess what? For the 2 weeks, everyday my concerned friends and colleagues will whatsapp me to ask me if I have delivered… as my EDD gets nearer, I begin to feel more frustrated as I very want to ‘regained my freedom'(oh man! This is the stupidest thinking I ever had, you will know why as I shared more about parenthood in future), and is eager to see the little being who had been hiccuping inside my tummy for months.

By the time my EDD is over, I begin to feel more ‘zen’, as I suddenly wonder if I am really ready for her arrival. What destinated to come, will come somehow… it’s just a matter of – when?

19th Oct 2015
Around 8+pm: went to toilet and saw something like mucus plug. Previously I had Googled on how to differential mucus plug vs virginal discharge, apparently it is usually pinkish/brownish in color.
For my case, it’s pinkish, but the discharge amount is very little so I just ignore it and go back to watch my tv/eat my dinner, continuing to experience my irregular mild contraction on and off.

Around 11.30pm: went to brush teeth and prepare to sleep. Realised i discharged a “lump” of pinkish mucus plug. But since the contraction is still not very strong. I go back to my Facebook surfing and proceed to sleep.

20th Oct 2015
Around 4.20am: it’s been a long time since I can go toilet after almost 4 hours of sleep, usually I will be awake around every 2-3hours to pass urine (sad life of a preggy). Stomach feel weird. I felt like passing motion but no result. Next moment, I saw blood. For a moment, I thought it’s my piles and feel quite annoyed. Why of all times…? But to be sure, I checked again and realised it’s from eh… the front. Holy shit! This is the bloody show!! And I managed to discharged quite a big lump of them (I always wanted to ‘document’ these ‘medical experiences’, but end up finding them too gross and didn’t proceed to take photos like how others managed to). After googling (again!!), decided that since I do not have super strong contraction, and waterbag is still in tact, I shall wait till the checkup in the morning (having a 8.30am appointment).

Around 6+am: felt something gushed out and indeed, more blood. Wonder if today is the day? So excited… finally… but I begin to feel very weird and uncomfortable. After showering, quickly check to ensure G have woke up, and tell him that I have the symptom of delivery. We decided to “pack light” and only bring the “labour bag” to clinic in case is false alarm, but seeing me in pain, he called a cab and we quickly rush down. On the way to hospital, tried to eat bread to distract myself but failed.

Around 8.30am: finally reached clinic and told the nurse about my condition, she quickly brought me to level 2 for the CTG.

Around 8.45am: Was brought to level 2 to check on my “progress”, in Thomson Medical Centre, Level 2 is the place where there’s labour room and “observation room” (I’m too nervous to remember what the room is called) where we can monitor our contraction. One of the nurse (let’s call her Nurse A) asked G to go down to level 1 to make arrangement for the hospitalisation admission, but I was worried that this might be a false alarm (outcome of reading too much false alarm stories on Facebook) and asked “Huh? Need to? What if it’s not contraction? Just false alarm?”. Nurse A look at the hopping me (ever since I reach TMC, I have been “hopping” around as the aching pain is too much for me to stand still) for a second and ask “Are you sure? Let’s check on your dilation first.” and send me to the bed and check on me. “You are already 1cm dilated, you better get your husband to make the arrangement and we proceed to do the checking”.

Reluctantly, I asked G to proceed arrange for the admission and I was send to change into the hospital gown, where I experience more “bloody show” and end up busy cleaning the toilet bowl. Once I was out, the nurse told me my gynae – Dr Benjamin Tham was here to see me but left since I was in the toilet. And she then asked if I had passed motion this morning and when I replied “No”, I was inserted “something” to clear my bowel and gosh, the effect kicks in within 1-2mins! When I finally clear my bowel and out, I was told once again, my fast and furious gynae had came but left AGAIN!

Around 10am: To prevent wasting my dear gynae’s precious time, I was out on a wheelchair (first time in my life!) and send to the gynae’s clinic for checking. When Dr Tham check on me, he say “You are already 4cm dilated! Very fast leh!” and then, I was send back to level 2 where I was administered the epidural – my option of pain relief. As the anaesthetist was performing the epidural, Nurse A told her that I had initially wanted to go home… >_<

In contrast of some people saying the needle that was poked to the spine is very painful, I thought the one poking into my hand is more painful. And my contraction pain takes around 45 mins to get “numb” off instead of the 30 mins. Anyway, after settling my epidural, I was pushed into one of the deliver ward to wait for the moment.

Around 12pm: I’m hungry. But I’m still on the bed waiting… The contraction pain is coming back again… so I complained to the midwife (it actually took me a long time to figure out those “nurses” in purple uniform might be the midwife), asking if the epidural has wear off. She checked and told me I was 8cm dilated so the previous dosage is not strong enough anymore, and increase the dosage for me

After 1pm (seriously, by now I have lost track of all the time): The midwife come in and check on me and told us that I was fully dilated. Somehow, G’s warm hand seems to be turning cold =.=” I think he is more nervous than me for the moment.

After waiting for a while, the midwife “put me into position” and asked me to push (somehow I was quite surprise as I was expecting at least Dr Tham, midwife and a nurse to be presence instead of her alone). So like those scene in TV, I was trying hard to push but nothing happened. After 2 to 3 pushes, the midwife do a check and tell us, the baby had pooed! Reminded of A’s incident, my heart sort of skipped a beat.

When Dr Tham came over and was told that baby is under distress and heartbeat dropped whenever I push + baby had pooed, he “ask” me if we can “vacuum” baby out. Of course at this stage, I have no choice but to agree (think about it, wonder why he didn’t ask me if I want vacuum or forceps baby out). I thought to myself “I’m trying so hard to save $, but baby decide to spent more somehow” *SIGH*

As fast as the speed of his speech… Dr Tham just sat on his chair, and in a short while, I was asked to push again. While waiting his next “Push” instruction, he actually ordered me to “Stop” and tell us the umbilical code has entangled around the baby’s neck. Was panic for a few seconds (as I cannot see anything happening “down there”) and I was suddenly caught by surprise when “something” (or rather, someone) heavy was placed on me. It took me a few seconds to finally registered that the “something” was actually the one whom I have been waiting to meet for the past few months.

In contrast to the scene we watched on TV (and what I have been anticipating), where once baby left the mother’s body, she will cry out very loud and the mother was so touched she was moved to tears, there I was “stunned like vegetable” wondering why the baby is “throw” on me like a heavy block without a sound.

The rest of the movement is so fast that I actually only managed to understand what happened after a while:

Finally, after a while, a nurse walked in to clear some stuff and G asked if he can carry the baby to me, she nodded and the next moment, we start keeping ourselves occupied with the photos shooting session with Leticia 😛

Mission accomplished! Nine months of waiting and we finally can see Princess Leticia!

P/S:
Not sure why is it so, but I was sent to the ward only after 3.30pm, so I was famished to death. Luckily there is a “survival pack” for the waiting Dads in the hospital and G took one and shared with me.

Hello Hello, when can I say bye bye to you, Eczema? 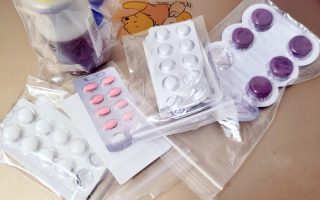