Thanks mig.me for the invite to watch the movie Don’t Go Breaking My Heart 2 单身男女2 – a production of Media Asia Film.

I guess what leave a deep impression on most is this classic statement:
“十个男人九个坏，还有一个想作怪！如果有第十一个一定是火星人！”
How true. Every woman wish to be the last woman to the man she love, but unfortunately, something life is more complicated than we can handle.

For some, this is simply a light hearted show – I myself can’t stop laughing as there are so many funny scene.

For me, I personally think this show brought up different sides of how each individual response to a relationship:
– Giving up due to insecurity
– Trying to hide one’s real feeling by pretend that the relationship doesn’t matter
– Trying to hide inside own cocoon when discovered that things does not goes your way
– Being courageous and never give up once set target
– Believing that just being there is sufficient

A lot of time, people make a lot of ‘unwise’ choice, but love just blinded us.

Personally, I do not like the character Cheung Shen Ren 张申然 (Opps!). Feel that he is very childish and immature, Fang 方启宏 and Paul 程子建 on the other hand are too good to be true characters, no wonder the two ladies in the show – Cheng Zixin程子欣 and Yang Yang Yang杨鸯鸯 fell in love for this “earthling”.

Movie Synopsis
In the first movie, “Earthling” Cheung Shen Ren (Louis Koo) loses Cheng Zixin (Gao Yuanyuan) to the “Martian” Fang Qihong, he decides to keep it cool and reverts to singlehood graciously. Cheng and Fang, meanwhile, live happily ever after…… That seems to be the fairytale ending from DON’T GO BREAKING MY HEART. In reality, the story is far from over: the three finds themselves once again entangled in an even more complicated relationship in DON’T GO BREAKING MY HEART 2.

After jilted by Cheng, Cheung starts dating “Goddess of Stocks” Yang Yang Yang(Miriam Yeung), who works in an opposite building. Yang has been turning a blind eye to Cheung’s philandering until she meets Paul (Vic Chou), a romantic returnee from France whose devotion has melted her heart.

Afraid to lose his lover again, Cheung determines to settle down and marry Yang, but fate works in mysterious ways. It turns out that Cheng’s wedding with Fang(Daniel Wu) has been delayed and she is now directly working under Yang. A chance encounter with Cheng again makes Cheung question his decision, because even though he appears to have emerged unscathed from their previous relationship, he was profoundly hurt and still hasn’t fully recovered.

Paul is in love with Yang; Yang has accepted Cheung’s proposal; Cheung is unable to get Cheng off his mind; and Cheng is about to marry Fang. A quadrangular relationship among five people – who is really the love of their life?

P/S: Can anyone tell me where can I find the cute octopus in the show that “Paul” last brought with him into the lift? 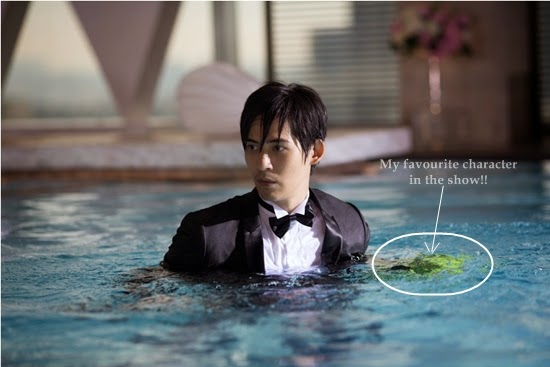 The heART of Tampines